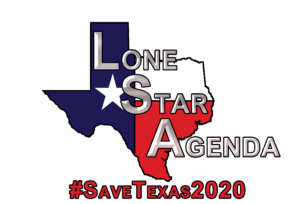 On Monday, July 22, Don Dyer, a conservative donor and businessman, announced on Facebook the Lone Star Agenda – Save Texas 2020 plan.  Don presented the plan to the Texas Conservative Grassroots Coalition Summit attendees on July 13 (a standing room only meeting of leaders from across Texas hosted by Grassroots America). Coalition leaders were energized and excited!

The Lone Star Agenda – Save Texas 2020 Plan will unify Independent Conservatives and Republicans as we push to engage Republican elected officials on the unfinished business of the 86th legislative session – the session that turned Texas from red (conservative) to purple (progressing toward blue liberalism/progressivism) and ripe for a blue Democratic takeover in 2020.

We want to unite conservative voters and the Republican officials we hired at the ballot box around the Lone Star Agenda.  From there, we want action. Here’s how Don said it,

“Texas is now a Purple State. To turn it Royal Blue, Democrats plan to inspire, excite and ignite Democratic voters. What’s our plan? It’s evident Republican leaders don’t have one that inspires confidence in their grassroots supporters.”

The Lone Star Agenda, as Don puts it, is a “common sense plan to unite Texas Republicans and keep Texas Red.” He also describes it as “a legislative package that will inspire, excite and ignite the base.”

The Lone Star Agenda spells out principles and values with desired action – all of which are found in the Republican Party of Texas Platform – but were neglected during the last several sessions and/or killed by Republicans during the 86th session that ended on May 27 of this year.

The purple session could not have come at a worse time as polls show Texas conservatives are increasingly dissatisfied with progress made by Republicans, which COULD trigger the “stay at home” option during Election 2020.

Republicans CANNOT afford to lose ANY of their base, and they know it!

This is WHY we cannot just “put it all behind us and move on.”  If we just pretend nothing is wrong and keep saying, “Democrats bad – Republicans good,” we cannot be sure that the voters will see it that way!

A new agenda is needed to unite Independent Conservatives and Republicans before the 2020 election. The Lone Star Agenda will restore the values most Texans hold dear and reaffirm Texas as a unique and vital state to reverse a rising Blue Tide. This CAN save Texas – and the Presidential Election – in 2020!

The Lone Star Agenda We place the constitutional rights of Texans to liberty and self-determination for themselves and their families above the desires of government officials and special interests: 1. Allow families to make mental and physical health decisions for themselves. 2. Stop wrongful removal of children from families by restoring due process rights for parents. 3. Stop local ordinances that interfere in private employer-employee relationships. 4. Increase protections for unborn Texans. We must reform and protect the Texas institutions that are critical to our historical identity as the Lone Star State: 5. Improve election integrity (paper ballot backup audit trail; citizenship verification). 6. End taxpayer-funded lobbying. 7. End union dues withholding from public-sector paychecks. 8. Protect Texas monuments. We must improve the security of Texans to be safe in their communities and free from injustice: 9. Secure the southern border (interior enforcement to end the “magnet” effect). 10. Stop human trafficking. 11. Protect the rights of Texans to bear arms.
Read the Lone Star Pledge with Signatures (PDF)

Urgently Working to Save Texas,