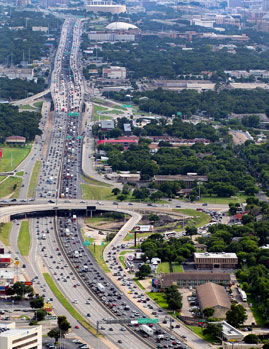 Today, Texas Conservative Grassroots Coalition leaders from Grassroots America – We the People PAC, Texans Uniting for Reform and Freedom (TURF), and Texans for Toll-free Highways are praising Governor Greg Abbott and his Texas Transportation Commission’s vote to fund the first critical segment of the Interstate-35 expansion through downtown Austin without tolls. The Coalition noted the Commission has prioritized existing funding to get this major project underway without adding to the tax burden of working families.

JoAnn Fleming, Executive Director of Grassroots America stated, “During his first gubernatorial campaign and throughout his administration, Governor Abbott consistently promised to fix state transportation woes without raising taxes, fees, debt, or tolls, and that’s precisely why 164 grassroots conservative political opinion leaders – influencers – representing 133 unique groups and districts across Texas– sent a letter of support in favor of Abbott’s non-toll I-35 Expansion, which includes 12 segments on the state’s 100 Most Congested Roads List for 2019. For Governor Abbott, it is simply a matter of ‘Promises Made – Promises Kept.’ With our state leaders facing a dreadfully painful 87th legislative session budget process with unfolding economic hits from the coronavirus shutdown and oil price collapse, we are stepping forward now to have Governor Abbott’s back.”

Special Interests Working to Convince Abbott to Break His Promise

At least one group, Keep Texas Moving, funded by Texas Association of Business, criticized Abbott for putting all of TxDOT’s discretionary money into one basket, supposedly depriving other areas of the state, but the Coalition notes that all TxDOT districts will still receive their dedicated percentage of formula funding as programmed.

Terri Hall, Founder/Director of Texas TURF and Texans for Toll-free Highways asserts that Keep Texas Moving will use this as an excuse to toll everything else, given the tight budget — “Since the I-35 project will consume all of TxDOT’s discretionary funds for a number of years, their backers will claim no other projects can move forward without making it a toll project, specifically a public-private partnership (P3) or Comprehensive Development Agreement (CDA). Cintra, one of the primary private toll operators in Texas just happens to sit on the board of Texas Association of Business. Cozy, right?

“It’s obvious what’s going on here. A Spain-based global firm, Cintra, muscles its way onto the board of what used to be the premiere voice for Texas businesses – TAB – and forms a lobby group to sideline the Governor’s non-toll plan to selfishly try, once again, to pass a bill authorizing crony private toll road contracts, which create a de facto tax hike on driving when Texans can least afford it.”

Hall adds, “Keep Texas Moving even brought on big-name lobbyists with close ties to the Governor – John Colyandro, Mike Toomey, and Ray Sullivan to stall this absolutely critical project and lobby the Governor and Texas Legislature to bypass Abbott’s no-toll pledge to get authority to do more super-expensive private toll roads next session.

“Texans have a visceral reaction to foreign corporations taking over our public highways and getting a 50-year right to gouge Texas drivers like they’re already doing in DFW with tolls that exceed $3/mile in peak hours. Fed-up Texans cannot afford this! We plan to help Gov. Abbott keep his promise.” Hall concludes.