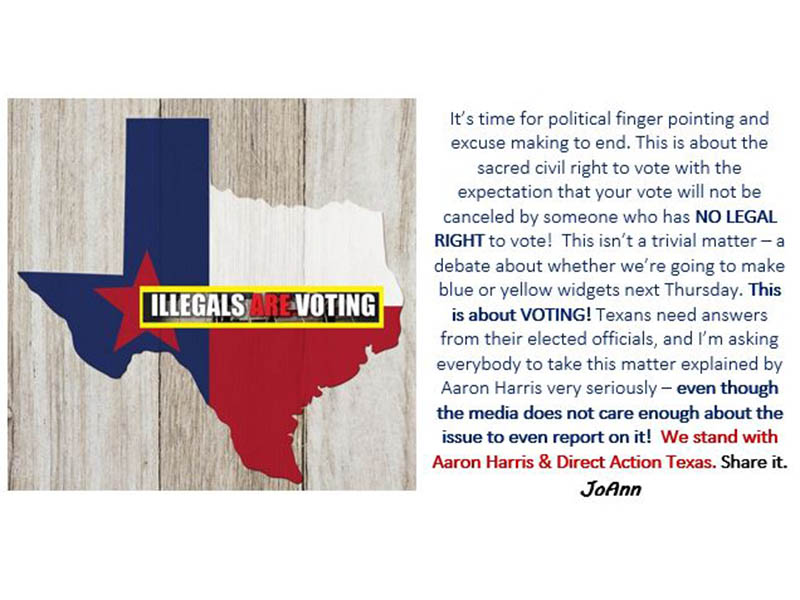 On August 16th, Direct Action Texas and Grassroots America held a joint press conference in which we announced a Texas Conservative Grassroots Coalition letter to Gov. Abbott asking him to direct the Secretary of State to begin verifying the citizenship of registered voters in Texas.

We asked the Governor to do this because 1) the Texas Secretary of State is appointed by the Governor, 2) the Governor has the constitutional executive authority to mandate citizenship verification of registered voters, and 3) Governor Abbott has strongly supported Coalition efforts to pass election integrity and ballot security reforms. In fact, upon signing Senate Bill 5 (increased penalties for people who commit election crimes related to mail-in ballots), Governor Abbott issued a statement declaring, “It is a primary function of government to protect citizens’ right to vote, and I will not allow the integrity of the ballot box to be compromised in Texas.”

In the press conference, I released figures that have understandably garnered quite a bit of attention and caused heartburn for some government officials. Many questions are circling; I’m going to address several of those now. Some will be better answered at a future time and place, after we’ve completed necessary follow-up work.

We can agree that government suffers from a disease of inaction. Even with the best of intentions, important projects simply die in government, especially those that are political hot potatoes – like election integrity. This is simply a political reality.

For nearly a year, the Texas Attorney General has had information about the problems with Texas’ voter rolls, and this project has simply stalled. In January, in discussions with multiple senior level staffers in the AG’s office, I predicted they would get nowhere by mid-year in 2018 and promised that – if they did nothing – I would go public in July or August. As I had originally feared, the project has stalled. Last week I followed through on my promise to release the information.

It is important for us to remember that we aren’t talking about stalling on a minor issue.  Since my discussions with high level Texas AG staffers about non-citizens being registered to vote in Texas, the March 2018 Primary Election happened.  The May 22 Primary runoff election happened, and the May 2018 local municipal, school board, and bond elections took place, not to mention other local runoffs and special elections.  Now, in just a few months, we’ll have the November 2018 General Election.  How does this not rise to the level of a priority as election after election goes by?

In 2017, government analysts compared Texas’ voter rolls against the Department of Public Safety (DPS) database. Most Texans don’t realize the Secretary of State (SoS) checks the DPS database every time they register a voter. This is done in accordance with federal statute.

They verify the applicant’s name, address, and date of birth. DPS has citizenship information, but the SoS does NOT verify that status, even though it is illegal for non-citizens to vote!

In checking the voter rolls against the DPS citizenship status, the analysts found 280,000 registered voters who – at the time they were issued a DPS ID – were not citizens. Again, non-citizens are illegible to register and to vote.

Who could these people be?

Click here to read the rest of this article.