Did you know Republicans are helping pass Democrat Priorities? 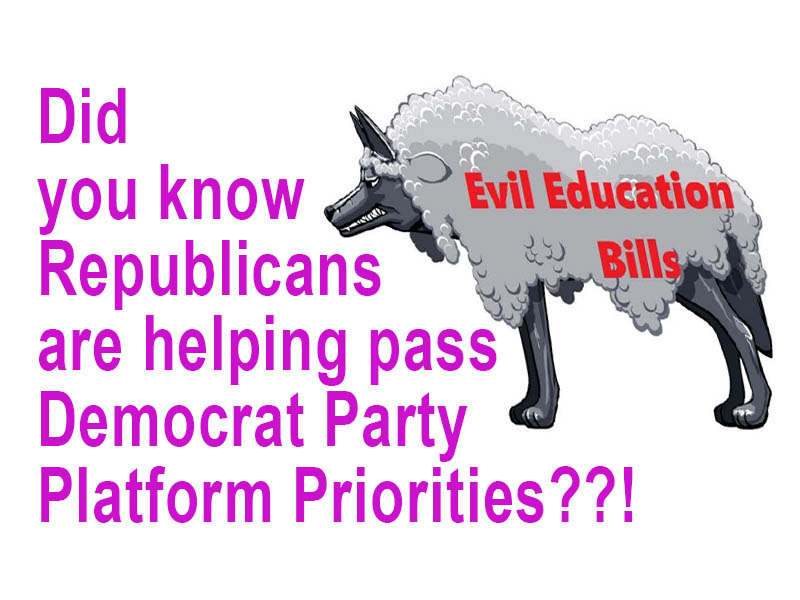 “Texas Democrats believe interpersonal violence is about power and control. We believe we can end this violence in Texas, including sexual assault and harassment, family violence, human trafficking, child and elder abuse, and other forms of gender-based violence, through comprehensive programs that address the needs of every person regardless of race, ethnicity, geographic location, income, disability status, gender identity or expression, sexual orientation, or immigration status. We must break the cycle of violence by working with a broad coalition to create safer and healthier communities for all.”

The original bill (SB 1109) was authored by Democrat Sen. Royce West and was passed in the Regular 87th Session by the Senate and House. The original bill required changes to the Texas Essential Knowledge and Skills (TEKS), no parental consent or local control, and required additions to school districts’ Dating Violence Policy.

After the bill was killed twice on Local and Consent Calendar on 5/26, the bill was amended to require the SBOE to draft rules rather than TEKS.  The Governor vetoed the bill and added it to the Special Session requiring parental opt out. The original author (West) was among the AWOL Democrats, so Republican Senator Joan Huffman filed the language in Special Session and passed it out of committee and out of the Senate.  This proved how much Republican leadership wanted this bill – a Democrat Party priority.

The bill was unnecessary because the subjects of abuse and family and dating violence are already covered in the 2020 State Board of Education-adopted Texas Administrative Code (TAC) Chapter 115 Health TEKS standards. tea.texas.gov

The bill also bypassed Education Code 28.004 that would have provided more transparency and parental oversight, including opt-in provisions. When looking at many of the curriculum suppliers around the country for dating and family violence, such as Love is Respect, in addition to the language in the Democrat platform priority, it is clear this bill would be a “vehicle” for Comprehensive Sex Education.

SB 9 from both the regular and two special sessions wasn’t passed until the 2nd Special Session – AFTER we were able to make many changes – such as placing it under Texas Education Code 28.004 for more transparency, parental oversight, and opt-in. Fleming word of caution:  The implementation rules must be watched! We cannot assume the Texas Education Agency will write policies and rules that line up with our values and the intent of our changes to this bill!

Summary: Family Violence Prevention legislation requires classroom instruction and reporting procedures for schools. This dangerous vehicle for Comprehensive Sex Education passed during the session, was vetoed by Governor Abbott, and then put on the charge for each Special Session by Governor Abbott who advocated an added opt-out for parents. It was clear this bill WOULD pass no matter how much we warned about its danger.  The only course we could take was to work to amend the bill.

After our amendments to ensure parental rights and local control, this legislation passed to require instruction on child abuse, family violence, dating violence, and sex trafficking reviewed by the SHAC, approved by the school district’s Board of Trustees, and in compliance with Health TEKS.  The implementation of this legislation should be monitored at the local and state level. SB 9 was signed by Gov. Abbott and will take effect on December 2, 2021.

Include evidence-based programs that promote social-emotional learning, safe and healthy relationships, consent, and age-appropriate sex education as a part of the curriculum in Texas schools from pre-K to postsecondary institutions;

SB 123 | Social Emotional Learning (SEL) by Sen. Johnson, Powell, Zaffirini (all Dem) passed with every Senator voting for it (31-0).  It passed the House on the Local and Consent Calendar 100-47-2. It was signed into law by Abbott and took effect 9/1/21. This is a seemingly harmless bill on the surface – dealing with character education; however, the character terminology in SB 123 comes straight from the main supporter of the bill, CASEL (Collaborative for Academic, Social, and Emotional Learning). See TX Senate Research Center bill analysis link: https://capitol.texas.gov/tlodocs/87R/analysis/pdf/SB00123F.pdf#navpanes=0

The CASEL definitions are very troubling (Source: http://measuringsel.casel.org), especially since CASEL promotes Critical Race Theory, comprehensive sex-ed, and the LGBTQ+ agenda in their programs. CASEL programs are already being recommended by the TEA for mental health materials. SEL focuses on attitudes, values, beliefs, mindsets, opinions, and behaviors of students and shifts the focus away from academics.

Authored by three Democrat Senators – two of which receive large campaign donations from Planned Parenthood – the stated intent of the bill is to “advance educational equity.” See this link to check out how CASEL views educational equity in terms of “Transformative Social and Emotional learning: casel.org/equity-and-sel-resources/.

“Transformative SEL” is a process whereby “young people and adults build strong, respectful, and lasting relationships that facilitate co-learning to critically examine root causes of inequity, and to develop collaborative solutions that lead to personal, community, and societal well-being.”

engagement in school and civic life. Core features include “enhancing and foregrounding social and emotional competencies needed for civic engagement and social change, such as reflecting on personal and social identities, examining prejudices and biases, interrogating social norms, disrupting, and resisting inequities, and co-constructing equitable and just solutions. Prioritizing students’ individual and collective agency to take action for social justice.”

It is hard to understand why Texas Republican elected officials have missed warnings about the Leftist indoctrination! Especially since many conservative, liberty-focused organizations and publications continue to warn about Social Emotional Learning: thefederalist.com, pioneerinstitute.org, truthinamericaneducation.com, flstopcccoalition.org, breitbart.com, citizensrenewingamerica.com, and cpi.org.

Republicans should immediately reverse course and:

In the original wording, this bill would have been a form of online gambling that Texas has never had before, presenting a dangerous inroad and set-up for future sports betting. It would have allowed electronic facsimile games of chance (raffles) to be purchased on-line/mobile phone, even if not at the game stadium, and credit cards used to make the purchase. The risk of minors and out-of-state players would have been very problematic.

It is important to emphasize that the original language of this bi-partisan bill filed by Rep. Matt Krause and Rep. John Bucy would have been classified as Class III gaming, triggering a federal law that allows certain Indian tribes to open casinos across over Texas.

Thankfully, we were able to get most of the language stripped from the bill, however, legislators did not see the problem with the bill in the original form and were reluctant to change anything until they were convinced to inquire from AG’s office if the bill was considered Class III gaming.  The final version still allows raffles to be purchased with a credit card; however, paper raffles remain, and no electronic raffles are allowed.

With 50% of the 50/50 paper raffle proceeds going toward a designated non-profit of a professional sports team’s choosing, proponents and legislators were pushing the narrative (excuse) that “50% of the money will go to charities” and these charities need this new revenue stream because they ran budget deficits from the past year due to COVID-19. Even with the increase of professional sports teams choosing to support BLM, as well as allowing and sometimes even encouraging kneeling for our National Anthem, our legislators were also prepared to help them expand gambling in Texas. This is a violation of the Republican Party Platform.

This is not the first time the Texas Legislature has attempted to take known forms of gambling and convert them into an electronic format, creating electronic facsimiles of games of chance.  Several attempts have been made to reduce lottery scratch tickets to an electronic format in the form of Video Lottery Terminals (VLTs). The bingo industry also attempted multiple sessions to sell the concept of displaying the outcome of electronic bingo pull-tab tickets in a graphic and dynamic manner.  And there have been several bills filed – even by Republicans (Sen. Lois Kolkhorst, for example), seeking to decriminalize fantasy sports betting.  Gambling is destructive to society and the family and should be opposed in every legislative session.

Invest in trauma-informed care and trauma prevention programs aimed at preventing adverse childhood experiences (ACES), which have been shown to cause increased chronic disease in adulthood;

SB 1267 by Senator Royce West (D) | Relating to continuing education and training requirements for educators and other school district personnel, including amending Education Code 38.036 to increase awareness and implementation of Trauma-Informed Care training in school districts.  This bill passed 30-1 (Eckerdt (D) nay) in the Senate and passed the House by a record vote (Record 1746): 138 Yeas, 5 Nays, 1 Present, not voting. SB 1267 was signed by Governor Abbott and took effect 6/18/21.

voting. The bill was “deemed” passed 31-0 by the Senate with a voice vote after amendments. The House requested a Conference Committee.  The Senate did not appoint conferees as the House Democrats broke quorum.  HB 3880 did not pass but only because of the quorum break and the session clock ran out.

Trauma-Informed care is more new and unsettled science without consensus among mental health professionals. Dr. Angela Sweeney and Dr. Danny Taggart maintain Trauma-Informed approaches are driven by social justice considerations and include the implications of social discourses beyond psychiatric knowledge. They also address the occurrence of the “revictimization” of service users by recreating abuse through ‘power over’ relationships, which can prevent recovery.  (https://www.madinamerica.com/2018/10/correcting-misconceptions-trauma-informed-care-surviv or-perspectives/)

There are many widely ranging disparities of written opinions and research literatures addressing the trendy Trauma-Informed care model. Dr. Michael Scheeringa writes about his concerns of how badly the Trauma-Informed science-policy gap is altering how taxpayers’ funds are spent and public policies are crafted. These are three examples from his sourced articles:

“It is not uncommon for science to be misused for political purposes. The end game for the proponents of the toxic stress theory is to influence public policy. From the first time the super-scary notion of toxic stress was mentioned in the literature in relation to psychological stress (National Scientific Council, 2005), the proponents of the belief have made it clear that this is the hammer they will use to drive the nail of spending taxpayer funds on social programs, in what they call closing the science-policy gap. They want publicly-funded support for better day care, better health screening, change of practices in juvenile justice, education in schools, education of police officers, and more.”

“Trauma-informed proponents will keep pushing the extreme agenda forward. They will keep repeating the ACES mythology. They will craft more resolutions and stimulate more trauma-informed cities. To create more believers in the more extreme agenda, it seems like the strategy of proof by repeated assertion. It’s an essential technique of propaganda that if you repeat something enough times, it’s real, right?”

“I’m an expert on childhood trauma. I’ve spent twenty-three years doing clinical and research work with youths with posttraumatic stress disorder (PTSD), with over fifty scientific publications on the topic, and published many of the groundbreaking research studies in this area. In my judgment, childhood trauma is not the cause of all those other massive life problems such as poverty, joblessness, homelessness, and incarceration.”

The Republican Party of Texas Platform Principle #9: We believe in a free enterprise society unencumbered by government interference or subsidies.

HB 5, expansion of broadband services through taxpayer-funded grants, loans, and incentives, was a highly bipartisan bill with scores of co-authors. Broadband expansion was one of Gov. Abbott’s top priorities for the 87th Legislative Session.  RPT principle #9 was also ignored by Lt. Gov. Dan Patrick and Speaker Dade Phelan.  HB 5 passed the House with a record vote (Record 1623): 133 Yeas, 13 Nays, 2 Present, not voting and the Senate 31-0. The fiscal note could not be determined, which means this is a blank check. Abbott signed it into law on 6/15/21 and it took effect that day.