What is Christian Nationalism? 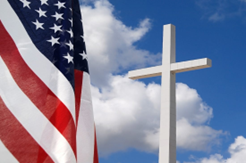 When parents across the nation spoke out against the destructive indoctrination of Critical Race Theory, they were called racists and targeted as “domestic terrorists” by the US Department of Justice. But these labels didn’t slow their progress or silence their fight. When Matt Walsh of the Daily Wire was attacked for speaking out against men having babies, he defiantly told the cancel culture mob, “Kiss my a**.” Seething in frustration from the failed attempts to silence conservatives with labels and name – calling, the Left has a new label rising in use: “Christian Nationalists.” But what is “Christian Nationalism”? Are “Christian Nationalists” a threat to the United States of America?

What is Christian Nationalism?

Currently, there is no agreed upon definition for “Christian Nationalism.”

“Christian Nationalism” is a blanket term used by the Left to invalidate any Christian who is politically involved and who advocates for the protection of life, our second amendment right to bear arms, parental rights, protection of children from harmful gender transitions, and against Critical Race Theory and more. Their goal is to silence Christians who unapologetically stand up for what they believe in and who do not waver on their beliefs under pressure.

Stephen Coughlin, an attorney and former intelligence officer, explains the origins of “Christian Nationalism” and how it is being used today against American Christians who love their country.

He said that first and foremost, you must look at the use of this term from a political warfare perspective. The use of the term is about intimidating people, namely Christians who are politically involved.

He said that “Christian Nationalism” is an information campaign designed to synchronize with the January 6th narrative. It is combined with that narrative to label Christians as a threat and to be seen as dangerous.

Is Christian Nationalism a threat to the media narrative?

Labeling someone a “Christian Nationalist” is a strategic element within a demoralization campaign commonly used in political and psychological warfare. Demoralization is a process in psychological warfare with the objective of eroding morale among enemy combatants and noncombatants. Its strategic objective is to encourage Christians to retreat, surrender or defect rather than defeating them in combat. It is meant to “other” Christians. To “other” someone is to alienate them from society. The Jews were “othered” during Nazi Germany. By “othering” Christians, their hope is that we will be silenced, and their perceived threat will be neutralized. This is strategic propaganda.

Denny Burk, professor of Biblical Studies at Boyce College, wrote that the label “‘Christian Nationalism’ encompasses a wide variety of political viewpoints . Media personalities tend to not be aware of the scholarly conversation on Christian Nationalism. Rather, they seem to define it as everything they don’t like about engaged Christians.”

Is Christian Nationalism a threat to the political power?

Christian conservatives are beginning to speak truth to combat this misinformation campaign. In a Grapevine, Texas presentation, American pastor, author and Dean of the School of Divinity at African Christian University in Lusaka, Zambia, Dr. Voddie T. Baucham, Jr. said, “If we’re not going to be Nationalists what are we going to be, Globalists? You can have that, all day, every day and twice on Sunday. No, thank you! No Globalism.” He continued, “what kind is it going to be? Is it going to be Christian or non- Christian? So, color me Christian Nationalist.”

Christians work to advance Christian principles in life, not Christian power. This is a key distinction   between Christian   political   engagement   and   this   so- called “Christian Nationalism” as defined by the Left. Christians SHOULD seek to love their neighbors by pursuing justice in the public square, which includes standing up for life (Matthew 25:40), protecting the rule of law, and honoring the Constitution.

Christian Nationalism is love of God and Country

Furthermore, “nationalism” or love of one’s country is not inherently sinful. However, love of anything over love of The Lord can become sinful. We are called to love Him with all our heart, soul, and mind (Matthew 22:36-37). Christians know that politics will not be our savior. We only have one Savior in Jesus Christ (John 14:6).

As Christians, we are first and foremost citizens of Heaven (Philippians 3:20) and a part of the body of Christ, which constitutes all believers in Jesus, regardless of where on the earth we reside. Our allegiance is to the Lord, our Savior. However, we can and should still love the country where God chose to place us. We are called to love our neighbors (Matthew 19:19). We should love and seek the betterment of our country. We should be good stewards of the gifts we have been given (Matthew 25:23). We have been blessed to be able to vote and to have our voices heard. Therefore, we must vote!

The argument that “Christian Nationalism” is a threat to America and our government is false. Our own government is a greater threat, as they have forgotten that they are public servants and continue to push godless ideologies on citizens.

Jesus said, “Everyone will hate you because of me.” (Luke 21:17) We should not be surprised at these attacks and false monikers, nor back down, as we are here to please the Lord, not men. “But Peter and the apostles answered, ‘We must obey God rather than men.’” (Acts 5:29) Christians who love America and are politically involved stand in the way of leftist ideologies and leftist power. Do not back down, no matter what name they call you or false accusation they throw your way.

At Patriot Mobile, we choose to serve God.