The Alamo Cenotaph: Saving the War Memorial honoring its dead 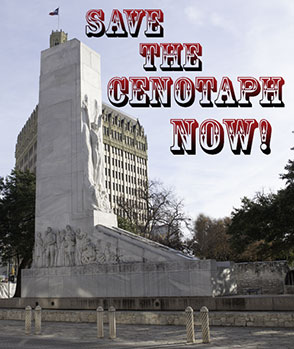 Last call for all who care about the Alamo and the War Memorial honoring its dead – the Cenotaph!
Go online NOW at the link below and vote NO on the permit to remove the Alamo Cenotaph from the battlefield, which will separate it from the Alamo and move it to a place where it can easily be vandalized and destroyed by the Leftist mob.

This will take you less than two minutes!

180 Grassroots Political Leaders
Representing Hundreds of Thousands of Texans
Send Letter to Save the Cenotaph
Last week, we sent an important letter to the Texas Historical Commission for the September 22 hearing where the permit to move the Cenotaph will be considered and a vote of the Commission will be taken.
That letter was signed by 180 opinion leaders and influencers who are part of our Texas Conservative Grassroots Coalition. These influencers represent hundreds of thousands of Texans and more than 400 unique organizations and political districts and precincts.

Note that LTC Colonel Allen West – the new Chairman of the Republican Party of Texas is the first signer.  We did not have to chase him down to ASK him! He immediately responded to ask that we add his name to the letter!

Please help us stop George P. Bush and the radical revisionists in San Antonio who want to “reimagine the Alamo” to fit their political correctness!

You have today until 8 PM to vote online!  Follow the easy steps above and VOTE!

PS The liberal San Antonio media and the Chamber of Commerce are working hard to move people to vote YES to move the Cenotaph.  We must outvote the LEFT and their leader George P. Bush – the elected Commissioner of the Texas General Land Office.