Call to Action TX Legislators: Help Save the Alamo/Cenotaph 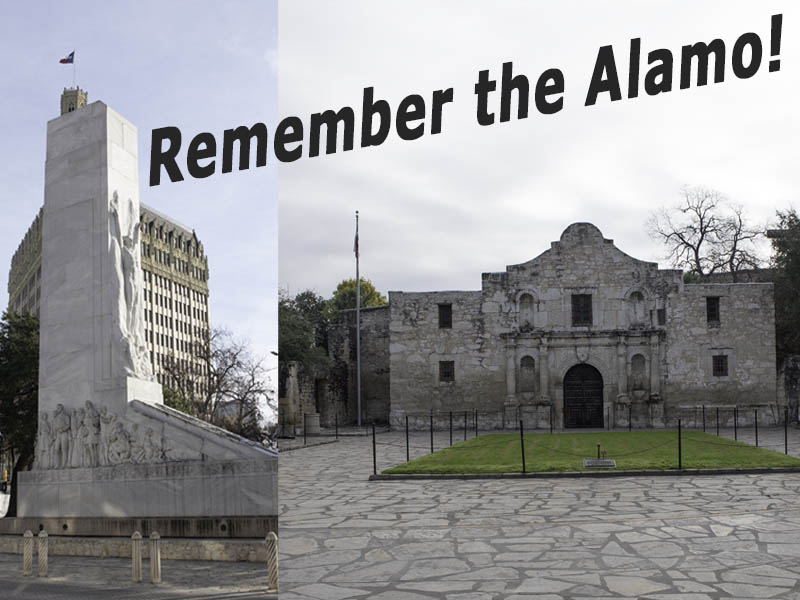 On September 12th, we sent you a Call to Action email outlining efforts by Rep. Biedermann and other elected officials to stop Land Commissioner George P. Bush’s plan to re-imagine the Alamo and move the Cenotaph to a so called “Free Speech Zone,” leaving this sacred memorial unprotected from vandalism and destruction.

Today, those same elected officials stood on the hallowed grounds of the Alamo, in front of the Cenotaph, to hold a press conference.  They called on Commissioner Bush to stop his unilateral actions and bring the future of the Alamo to the Texas Legislature during the upcoming 86th Session. We agree with Rep. Biedermann that the legislature is the proper place for the future of the most sacred shrine in Texas history to be debated.  The Cradle of Texas Independence must be forever protected for generations of freedom-loving Texans and for those who seek to know our history.  We do not want the Alamo’s history to be destroyed by multi-cultural quests for political correctness.

We appreciate the feedback you have given us concerning your calls and emails to the General Land Office. It is breathtaking the lengths they will go to try to fool the people.

State Rep. Biedermann Says ‘No’ To Long Term Lease With City of San Antonio for Alamo Property
San Antonio, TX (09/14/18) —  Representative Kyle Biedermann (R- Fredericksburg) stood in the shadow of The Alamo on Friday morning to urge officials to include Texas Legislature in the negotiations going forward  on The Alamo Master Plan.

The current Alamo Plan will move the Cenotaph into the ‘Free Speech Area’ where it cannot be protected and will be open to protest and disrespect. Even more startling, the Plan would include a long term lease agreement with the City of San Antonio giving the city the ‘ability to monitor compliance’ and the requirement in that lease that the GLO must prioritize ‘the World Heritage Site nomination and designation’ of United Nations Educational Scientific and Cultural Organization (UNESCO).

State Representative Kyle Biedermann said, “I believe it is imperative for Commissioner Bush to include the Texas Legislature in the process going forward with respect to the Alamo Master Plan in order to ensure Texas sovereignty over the future of the Alamo. Much concern has been voiced by legislators about moving the Cenotaph and the long term lease agreement with the City of San Antonio giving them the ‘ability to monitor compliance’ and the requirement in that lease that the GLO must prioritize ‘the World Heritage Site nomination and designation’ of UNESCO. As Texans, we should not allow an international body to impose on our most sacred of sites. Texas has a proud independent history and we must never allow international actors to revise or sanitize our history.

Texas State Senator Donna Campbell said. “Thousands of Texans have contacted my office expressing their feedback over the new Alamo Master Plan.  Chief among these concerns is the overwhelming desire to see the Spirit of Sacrifice, also known as the Alamo Cenotaph, restored and preserved in its current location.  The Alamo is one of our state’s greatest treasures and to this day it still represents the origins of what it means to be a Texan. It belongs to all of us, and it unites all of us.  In putting together the Alamo Master Plan, public input was sought and the majority of that input has asked for special consideration to be given to the Cenotaph and that it not be relocated.”

‘El Conservador’ conservative blogger and writer George Rodriguez said. “I stand here supporting Rep. Biedermann because I feel he is the last ‘wall’ to save the Alamo property from a lease that may allow changes to the site and even history of the Alamo. We must understand that this is a shrine of Texas history and it should be treated with care and reverence. We cannot and must not rush into any agreements with anyone unless they are carefully studied and reviewed.”