In a Constitutional Republic… 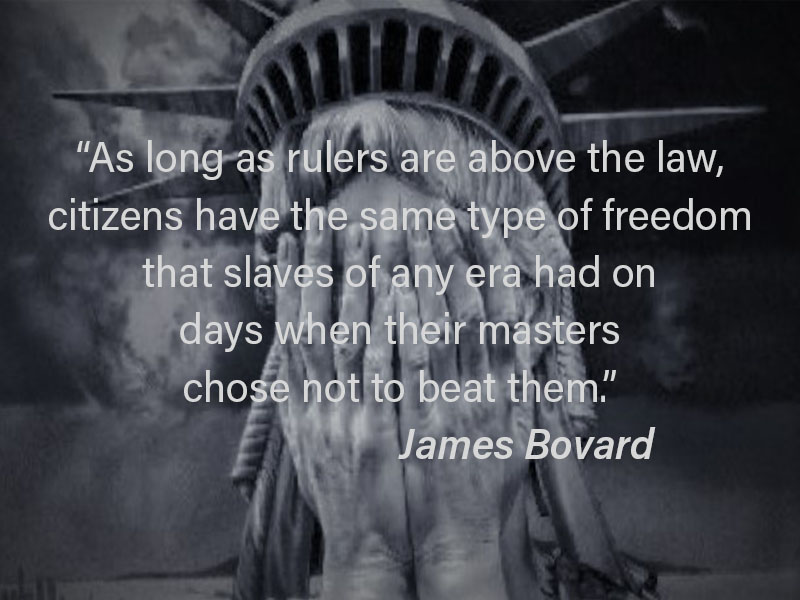 Government is the servant, not the master of the People!
Assume the role of master before it’s too late.

“Government is the people’s business, and every man, woman and child becomes a shareholder with the first penny of tax paid. With all the profound wording of the Constitution, probably the most meaningful words are the first three, ‘We, the People.’” – Ronald Reagan

A community, a state, a nation is known for what it tolerates. The independence of a free people is utterly dependent upon the principle “Government is the servant and not the master of the people.”

Both sides of the servant/master equation are at fault for the mess we find ourselves in today.

First, too many elected officials don’t believe they are public servants. They believe they are our all-knowing, enlightened masters and are either ignorant of their statutorily-mandated duty to conduct open government and to hear our redress of grievances against them, or they willfully, wantonly ignore that duty and behave as if they are accountable to no one – least of all the taxpaying rabble.

Then there’s the amiable, “nice guy/gal” types who just aren’t used to swimming with political sharks, are easily buffaloed by people with law degrees, just want to be loved, enjoy being in the “cool” group, and soon find they are in over their heads. The result? An elitist oligarchy that starts conducting the people’s business in back rooms just because they’ve come to believe they are smarter than the people who pay the freight, and they figure somebody in the justice system will always be there to save their bacon.

This is how we’ve completely lost sight of the American Revolutionary War principle of Liberty found in our Declaration of Independence.  We have lost “Consent of the Governed” in our local communities, in Texas, and in this nation, leaving government to stomp all over our liberty and pillage our children’s heritage for Big Government Utopias we never asked for.

The second ingredient in this toxic, public corruption-breeding stew is the fact that most people do not see themselves as the masters. Most people – the intended Masters of Government – fall into at least five discernible categories:

1) the ignorant, who just don’t know any better;

2) the afraid, who fear business or social retribution for speaking out against the local ruling class;

3) the clueless groupies, who treat all elected officials as rock gods and would never, ever dare object to anything they do – especially if the officials are Republican;

4) the cronies, who love sloppy, stupid government as long as their head can be in the trough and their pocketbooks on the receiving end of special deals; and

5) the above-it-all detached ostriches who just don’t give a rat’s rear end.

Under the Austin Pink Dome, special interests abound, unconstitutional retroactive bills to distribute corporate welfare are signed into law, the state pours money into “Welfare for Sports and Big Tech,” and powerful legislators in both parties manipulate the system and profit from it.  Meanwhile, we’re still begging for secure elections, property tax relief, accountability for public schools, and for somebody, somewhere to stop groomers, pedophiles, and pointy headed educrats from corrupting our children with deviant smut.

In Washington, DC, federal officials shred the US Constitution every day, and leadership for both parties just stand by and let it happen.

Local government officials tell you that your county, city, school district, fill-in-the-blank special taxing district is as “lean” as it can be with no waste.  They declare they’ve cut your taxes and that taxpayer-funded bonds for noble causes will only cost you pennies, yet your property tax bills keep skyrocketing.

Tolerating political chicanery and unbridled corruption will get you more of the same, and in bolder, bigger doses.  When will you decide you’ve had enough?

Grassroots America believes YOU can, and YOU must hold elected officials accountable. Our mission is to empower, educate, and unite those citizens who care about their children, grandchildren, and Liberty; those who do care about Truth; and those who are sick of the mess we find ourselves in.

If you’re fed up, sign up for our alerts. Attend a meeting. Raise your hand.

“As long as rulers are above the law, citizens have the same type of freedom
that slaves of any era had on days when their masters chose not to beat them.”
James Bovard