A very bad bill will be on the Texas Senate floor later today!

You MUST ACT.
NOW!

Downward pressure on your State Senators from statewide Republican officials has them signing on to bills that are big Nanny State expansions that will cost all of us plenty.

SB 10 is one of those bills.  It is titled, “Relating to the creation of the Texas Mental Health Care Consortium.”

When EVERY Democrat and EVERY Republican Senator signs on to a low number bill like this, you should understand that means a whole lot of “inside ball” horse-trading has happened.  You can bet that it has NOTHING to do with your liberty or saving you money!

“The Road to Hell is paved with Good Intentions.”
A Hand-book of Proverbs, Henry G. Bohn, 1855

SB 10 is NOT right for Texas!
Texans DO NOT WANT big Nanny-state government.

Nanny State Central Planning mental health care bills are sweeping the nation.  If you don’t believe this is a threat, click here to watch this 7.5 minute video.  It will make your blood boil. 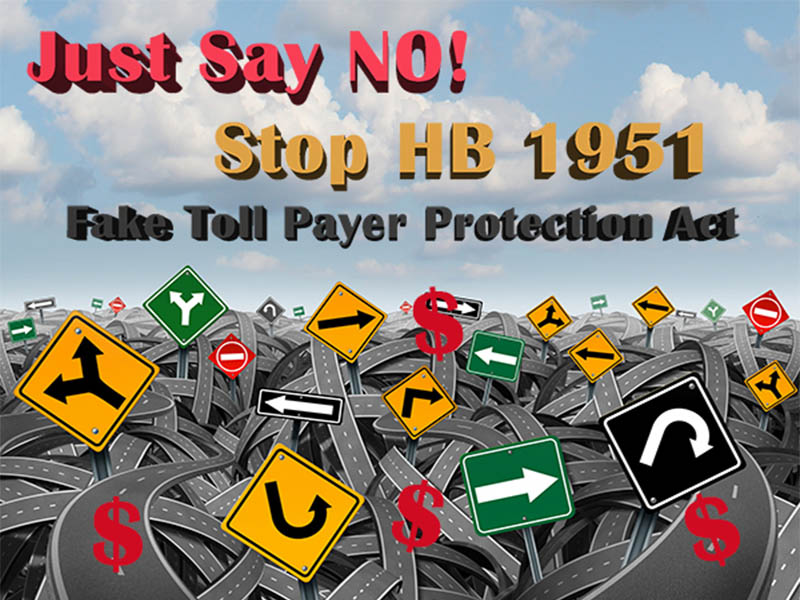 Texans for Traffic Relief – an Austin lobbying group front – is headed up by a guy who was once a leader in the Young Conservatives of Texas.  So what? He now shills for contracting and engineering special interests and has declared war on conservative grassroots activists:

The Big Road Lobby doesn’t like the promises made by Gov. Abbott and Lt. Gov. Patrick, nor the tremendous grassroots support these statewide officials have earned because they’ve stood firm on their campaign pledges for “no more toll roads.”

This FAKE “Toll Payer Protection Act”  claims to take the tolls off a road once it’s paid for, but then allows the Transportation Commission to extend the toll every 10 years into perpetuity (forever in gov’t terms)! That’s not toll cessation – it’s toll extension!

This is what our Executive Director has to say about HB 1951.  She gets to the heart of the matter by pointing out The Problem our Republican legislators are ignoring as they get all cuddly with the Big Road Lobby:

“We are stunned that Rep. Krause would be convinced by the Big Road Lobby to file a bill that undermines the promises made by Governor Abbott and Lt. Governor Patrick to end toll roads.  Rather than supporting a fix to TxDOT’s underlying structural management problems as cited in the 2017 Sunset Advisory Commission’s Report to the 85th Legislature (page 2), the Big Road Lobby continues to wail that there’s just not enough money.  As long as TxDOT is ‘not meeting expectations andis not prepared to effectively handle the influx of new transportation funding projected to double over the next decade,” nor has it “met key on-time or on-budget measures for several years,’ there can NEVER be enough money poured into the transportation bureaucracy!  We are deeply disappointed in Rep. Krause for filing a fake “toll payer protection” bill that undercuts taxpayers, our Governor, and Lt. Governor in order to appease the road lobby.  We call on him to reverse course, and we call on current House authors and co-authors to remove their support immediately.”  JoAnn Fleming, Executive Director, Grassroots America – We the People PAC and its premier project – the Texas Conservative Grassroots Coalition

Legislative Priorities for the 140-Day Siege…

Texas-style liberty cannot survive if its leaders are driven by pragmatism, which divorced from principles, drives one’s decisions to be based on political expediency (AKA raw fear of losing the next political race).

The media and a myriad of political voices – on both the left and the right – proclaim conservatism on its last legs – if not completely dead in Texas.  This prognosis fits their self-focused, self-justifying narratives, which declare our demise – based solely on the results of one mid-term election.

We got their memo; promptly filed it our circular file.

But, since some folks appear to be going all wobbly, we’re reaffirming our principle-based legislative priorities for the current Texas Legislative Session.

Most of these priorities are ones we’ve talked about EVERY legislative session for the past FIVE sessions (you know, back when Republicans had a super majority in the House and a larger majority in the Senate?).

Truth be told, Republicans have had trifecta rule down at the Capitol since 2003.  We suggest they stop listening to consultants and listen to the people who hired them at the ballot box…before they go the way of the Dodo bird and are consulted into extinction.

5) Religious Freedom, including right of conscience

We’ve spoken with several conservative legislators the last couple of days.  We are incensed that NONE of the independent gun rights groups were invited to the Abbott table and that our conservative legislators were shut out of the conversation too. When gun control advocates leave the Governor’s meeting high-fiving each other, you know there’s a reason for concern.

In short order, we will plan a Coalition effort with conservative legislators to stand against erosion of gun rights and to support laws already on the books that are not being enforced.  We support school safety, but we do not support criminalizing lawful gun-owners in the process.

The following is our initial read on Governor Abbott’s May 30, 2018 School and Firearm Safety Action Plan:

2) His proposal makes it a potential felony to store a gun in your automobile.

3) His proposal will make it a potential felony to make firearms accessible to you or your properly-trained teenagers in the case of an emergency.

4) His proposal effectively outlaws unsupervised shooting by anyone under the age of 18, regardless of training or ability.

We are also concerned with potential “red flag” laws that could target gun owners on an anonymous tip, allowing judges to temporarily seize an individual’s firearms if that person is considered an imminent threat. If a citizen speaks against a tax increase or a bond election, would local officials consider that citizen an imminent threat?  What about citizens who hold prayer vigils outside abortion clinics or groups who hold Tax Day rallies?  Oh, yes indeed, some officials would call that an imminent threat in a heartbeat!

Other language in the plan approaches criminalization of gun owners if they fail to report a missing firearm in a specified government- mandated time frame.

We will oppose any legislation that makes it harder for citizens to use their firearms for the core lawful purpose of self-defense.

Download and read the Abbott Plan by clicking here.

Download and read a first analysis by clicking here.  More will come.

Stay tuned.  Our right to self-defense PRE-DATES the Second Amendment.  It is a God-given right – not a right bestowed by the government. We intend to fight to preserve it.  What about you?