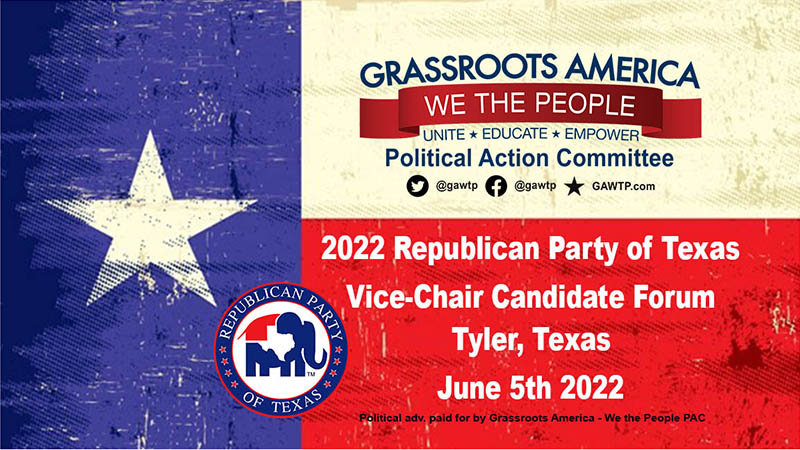 Grassroots America was asked by several leaders in our statewide Texas Conservative Grassroots Coalition if we would conduct job interviews with the candidates for Vice-Chair of the Republican Party of Texas. Believing this job interview project would yield important information for RPT Convention Delegates who will vote on the Vice Chair, our Board of Directors approved the non-budgeted expenditures for hiring a professional videographer, a professional stage set-up, and renting a facility.

No candidate, campaign staffer, questioner, Coalition leader, or Board Member saw the questions before the event. Executive Director JoAnn Fleming has a very strict code for maintaining question security for all candidates in every race. This is not a game.

Elected leadership is serious business – most especially when liberty is under constant assault. If there was ever a time when conservatives needed to raise standards for themselves as well as their opponents, that time is NOW.

We were not looking for bumper sticker sound bites. The questions were designed to bring out the candidates’ core principles, values, skill sets, and intent for the office they are seeking.

We appreciate the participation of all three candidates – Alma Jackson, Dana Myers, and Adrienne Pena-Garza. We thank our selected forum masters – Mom Caucus Members Trayce Bradford and Dana Harris. Thanks to Grassroots America Board Member Sue Evenwel for stepping in for JoAnn for the “on camera” introductions and acting as interview timekeeper.

We present to you the candidates via video answering for themselves. To assist you with the content, we are providing the list of questions asked to each candidate. All were asked the same questions in the same order.

We will not interpret the responses. We will not answer for the candidates. We will not respond to sandbox comments. Delegates have factual information now from which to make a wise choice. It is up to each delegate to make that decision. 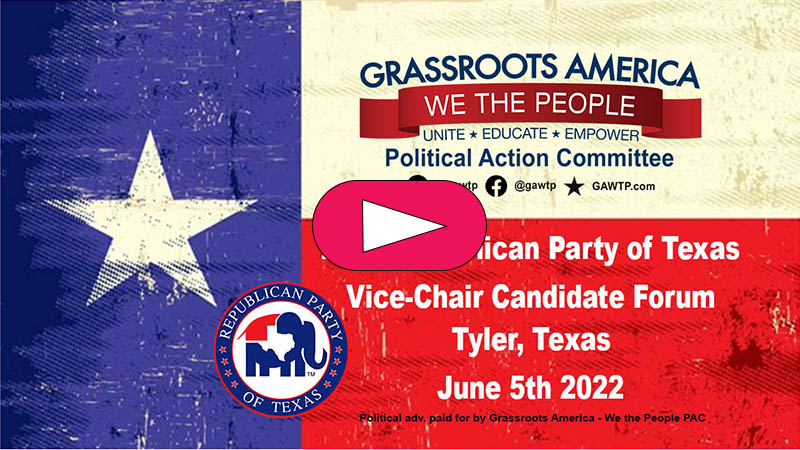 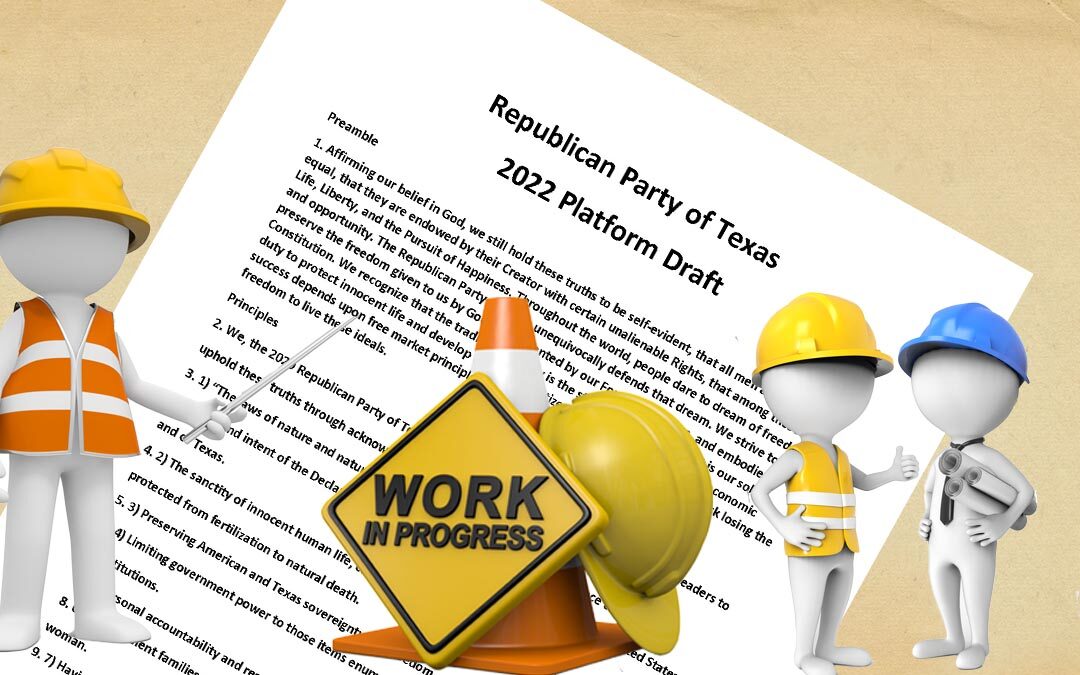 Your last chance to vote was today, but your work is not done.

Stop the effort to purge grassroots conservatives from the Republican Party of Texas convention process! Show up with conservative friends and participate!

What you need to know:

For Grassroots America’s home base county –
Smith County – our Precinct Conventions
will be held Saturday March 5, 2022 at 10:00 AM.

Why attend your precinct convention? You can help build a conservative Republican Party of Texas Platform up from the grassroots level!

Warning:  Democrats who voted in the Republican Party Primary can attend GOP precinct conventions and work to pass liberal Democrat resolutions.  If conservatives don’t show up, while Democrats and Rinocrats do, guess what happens?

How you can be a delegate
to your precinct, county and state
Republican Conventions:
Click here for a handy one-page guide.

The Republican Party of Texas rules require you to submit THREE COPIES of each resolution at your precinct convention. Bring your conservative friends (who voted in the Republican Primary) with you to your voting precinct convention to help get your resolutions approved!  These will then go to your Senate District or County Convention for consideration.  If approved at the Senate District/County Convention level, they will go on to the State Republican Platform Committee for consideration.

You may download and print these resolutions or use as a guide to write your own:

Preserving the existing platform on transportation and toll roads

What’s in your current party platform?

Resolution in Support of a Ban on Taxpayer-Funded Lobbying

Resolution in Support of a “No-Growth” Budget

Resolution in Support of Eliminating the Property Tax

Resolution to Build a Pro-Life Texas After Roe

Require Public Education on the Humanity of the Preborn Child

Resolution to Repeal Kinsey Based Laws

Resolution for Parents’ Right to Know and Consent

A special “thank you” to all who submitted resolutions in the midst of a busy Primary Election Season.  These are by no means all the resolutions Grassroots America supports, but these are the ones sent to us by our deadline.   We will send more resolutions before Friday as late ones come in.  Please note:  We cannot possibly fill hundreds of requests to write resolutions for your precinct convention.  Please take the initiative and write your own!

Thanks for asking, but we just cannot possibly interview all Republican candidates appearing on ballots in all 254 counties.

We are swamped with questions about candidates and cannot possibly send a personalized reply back to each person.

Don’t Know Trayce Bradford, Conservative Republican Candidate for TX Lt. Governor?  You should!  One of our strongly endorsed candidates, Trayce does NOT support Republicans appointing Democrats to committee chair positions NOR does she support the Republican majority in the TX Senate passing liberal education bills! See what Trayce says about pandering to Democrats!  https://rumble.com/vv1jve-trayce-bradford-candidate-for-lt-gov-of-texas-acwt-interview-2.14.22.html

In His Own Words:

WHY Louie Gohmert is leaving a safe seat in Congress, where he could have been part of a new Republican majority to come home to fight for Texas.

Fleming said, “In agreement with the Wise County Conservatives Board, Grassroots America’s Board of Directors is not yet prepared to endorse a candidate for the 2022 Gubernatorial election, but we are fully prepared to announce that    we will not endorse the current Governor of Texas, Greg Abbott.

“The singular purpose of government is to protect the liberties of the people. Greg Abbott swore an oath to protect and defend the Constitution of Texas and yet, for more than a year, he flagrantly broke this vow when he unilaterally, without legislative approval:

“In addition, even though the Texas Constitution (Article 1, Section 6) protects the ‘natural and indefeasible’ right of worship, Gov. Abbott facilitated the closure of churches by local tyrants throughout the state – in the absence of any legal justification. Finally, the Texas Constitution (Article 1, Section 13) declares – ‘all courts shall be open’ and yet the court system was essentially shut down for months, again in the absence of any legal power granted to the executive branch.

“Two of the nine Texas Republican Party Priorities for the 87th Session sought relief from Governor Abbott’s expansive interpretation of his executive power because Governor Greg Abbott was derelict in his duty to protect and defend the rights of Texans during a time that they most needed an advocate.

“Abbott not once used his influence to pass legislation to end sex change butchery and chemical destruction of children – a Republican Party of Texas Legislative Priority supported by 94.65% of 2020 GOP Primary voters! In the last two legislative sessions, Abbott failed to pass election integrity measures that would strengthen ballot security by reducing the risk of digital/electronic fraud.  Texas Governor since 2015, Abbott has failed to verify the registered voter list to remove illegal aliens, felons, the deceased, and double registrations. In 2021, he signed into law SB1, which lowered the criminal penalties for voter fraud from a 2nd Degree Felony to a Class A Misdemeanor and allows political parties and candidates to send out unsolicited mail ballots!  He has ignored calls from the People of Texas 4th Special Session to restore criminal penalties.

“Abbott has done nothing to put Texans first by ending the magnets that attract and reward illegal border crossers. For the seven years he has been governor, Abbott has never done more than participate in federal “catch and release” at the border. He has not kept his promise of meaningful, lasting property tax cuts and has instead grown the size and scope of state government. When it comes to our gun rights, Abbott showed a willingness to embrace red flag laws and increase regulatory burdens on gun owners in his 2018 School and Firearm Safety Action Plan. Finally, Abbott has refused to convene the legislature to outlaw Covid-19+++ vaccine mandates while his executive order is ignored.

“Greg Abbott is long on talk but fails to deliver measurable results. During his Disaster Declaration for COVID-19 and his behavior during the past legislative sessions, we learned from Greg Abbott’s own actions that we cannot trust him to protect and defend our liberty. For this reason, above all, we cannot support his re-election.”